The presumption at the beginning of this project was that medical aids like orthosis and splints should not only reflect anatomical parameters and ergonomics but also the lifestyle, preferences, and taste of the user. A great design increases social and personal acceptance of medical aids and the patient’s satisfaction. 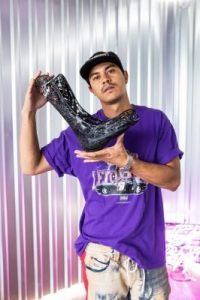 Even an injury can act as an impulse to create an innovative product that combines computational design, fashion, and medical purposes. This project deployed a parametric design approach and 3D scanning and involved the client who became a co-author of his own medical aid – a custom-made orthopedic orthosis for an ankle joint fracture.

The greatest challenge of this project was to set up the right strategy and technology to create a fashionable, high-performance product. The major difficulty resided in scanning the human body and achieving a precision that would enable the creators to develop a fully ergonomic product.

The designing and production process consisted of several phases.

The first phase comprised the scanning of a human body part – the right leg from the knee to the fingertips. For this, Subdigital used Photoneo 3D camera MotionCam-3D. During the scanning process, the camera was moving around the leg to make a 360-degree scan of the calf and the foot. Being the only 3D camera in the world that is able to scan moving scenes in high quality and resolution, MotionCam-3D was a clear choice for this project. 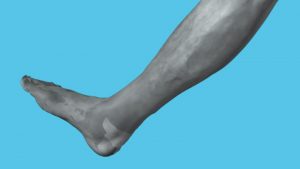 Photoneo developed special software for MotionCam-3D that does not provide a point-cloud but a “mesh in real time” – a 3D model with a continuous surface that does not require any post-production. The output of this scanning and meshing process is a high-resolution surface 3D model in the STL file format.

This method offers many advantages – especially a high scanning speed and a non-invasive approach. In optimal conditions, the 3D model is ready in 1-2 minutes and the patient does not need to undergo any special procedures before scanning.

The combination of MotionCam-3D and the special meshing software allows the scanning of any kind of objects and surfaces and thus finds a wide range of applications in various industries, from automotive to logistics, food industry, or medicine.

The computational design was created by Subdigital studio, which mainly works with the Rhinoceros 3D and Grasshopper software. It consisted of multiple stages – from processing the 3D model through parametric analysis and modeling to the generative design of the form and optimization for fabrication.

The basic concept of the design was to use mathematical models and simulations to evaluate the forces in the splint shell and the transformation of these parameters to forms. Such high-performance, visually complex and appealing, and detailed forms can only be produced by using a 3D printing technology.

The first step was to process the 3D data from the mesh model to a clean, mathematically defined (NURBS) surface. Photoneo scanned the leg multiple times to ensure the highest precision possible, each time scanning a different part of the calf, ankle, and foot. The 3D scan thus consisted of multiple separate mesh models. To get a high-precision model, the mesh geometries were cut by planes perpendicular to the axis of the model. The resulting cut curves were spread on the plane and each set of sections was rebuilt to a clean and mathematically valid curve. When placing these sections back in the position around the axis, a precise wireframe model and a valid, closed surface were acquired.

The mathematically defined model of the leg (NURBS geometry) was trimmed to the shape of a shell structure around the calf, heel, and ankles – areas where the structure is necessary for the functionality of the splint. This shell was ready for structural evaluation in the Millipede plugin for Rhinoceros 3D and Grasshopper software. Precise amounts of bending, stress, and pressure flows in the shell were then calculated. This process did not generate a 3D printable geometry yet but Subdigital calculated the information and parameters (stress lines and force intensities in certain places). Based on those, they were able to generate a highly performative 3D printable shape.

They were able to set up the right system of forces and pressures acting on the shell of the splint.

The basic principle of computational design is the transformation of parameters to forms and shapes using algorithms. Subdigital used the output of the structural analyses as inputs to generate the form in multiple layers. 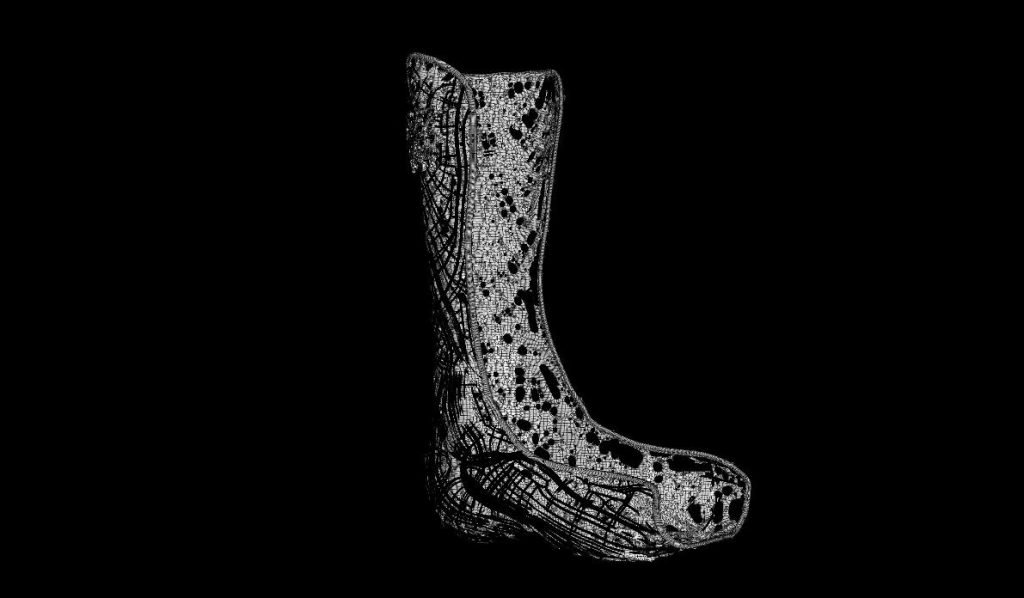 The inner layer was created using a method of wrapping the structure into a mesh volume. The smoothing of this mesh generated a form that appeared as a delicate, porous, etched surface. The density of the structure reacted to the intensity of forces – pressure and bending in the splint shell. Where necessary, it was generated thicker and stronger, in other parts it was thinner and more porous to spare weight, reduce the use of material, and achieve flexibility and breathability.

The outer layer was generated as a transformation of curves describing the force-courses in the splint under pressure. The ribbed structure formed by these curves reinforced the splint to the bending in the most important directions. In others, the structure kept its flexibility to ensure comfort for the user. Alongside the force-shaped ribs, Subdigital generated other sets of ribbed structure with various purposes. 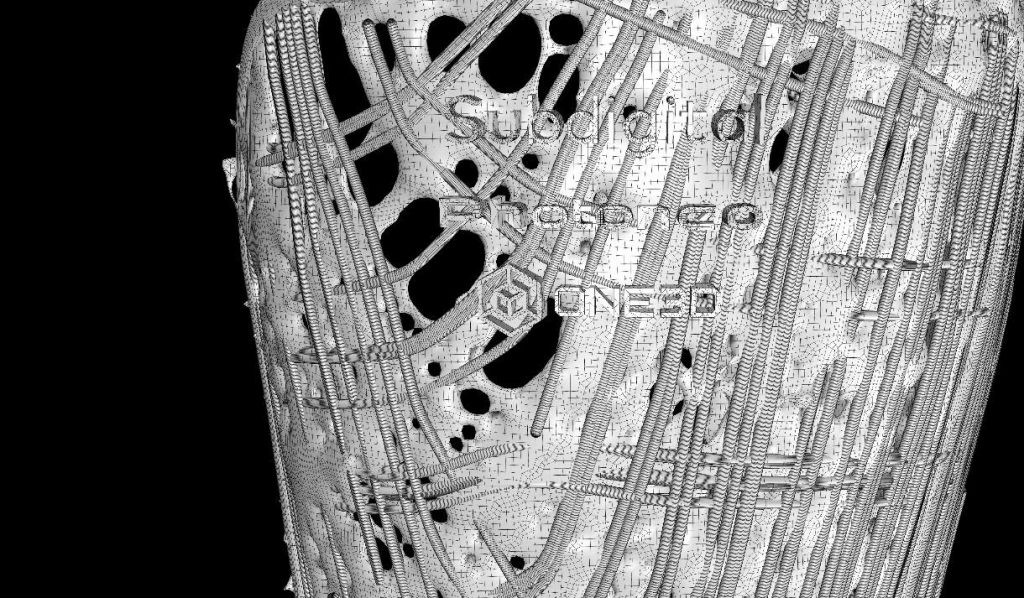 The splint was printed by One3D from solid, flexible, and durable material, using a polyamide powder PA2200 stiffened by a laser sintering method. This material has ideal properties for medical use – it is very solid and stiff, mechanically and chemically durable, and safe in contact with the skin. It also offers great possibilities with regard to a high detail of print and aesthetic intricacy. 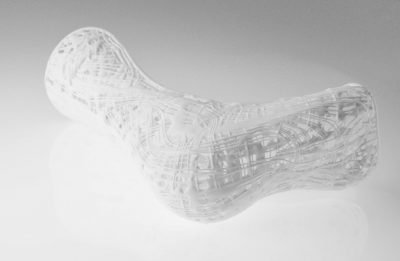 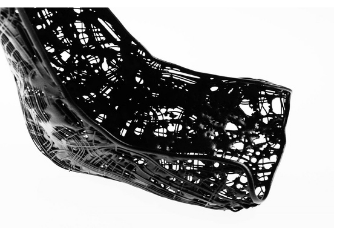 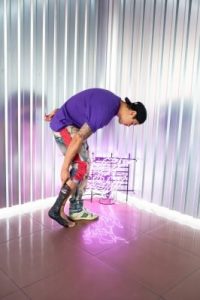 The final touches of the design were done by BannedStudios. The fine, black details follow the visual identity of the F*CK THEM creative house. This brand works with the motives of fire and flames – the logo of F*CK THEM was visually set on fire. The final graphics layer turned this highly performative and ergonomic design into a fashionable merch accessory.

The splint project managed to combine a high-performance medical design, technologies of 3D printing and 3D scanning, fashion, and art. The collaboration of experts from Subdigital, Photoneo, one3D, and BannedStudios resulted in a unique product for F*CK THEM.

Photoneo was asked to collaborate on this project to test a new kind of workflow. The result was an introduction of a high-performance parametric approach in the design of a medical orthopedic aid.