This application note aims to explain the use of line scan cameras and multi-channel flash features for wafer die inspections.

As technology is constantly evolving in today’s world, there is a need for more semiconductors to power and support the world’s data centres and 5G wireless networks. These semiconductors are made with silicon wafers and go through a 4-month process to develop them into a chipset.

To ease the wafer fabrication process and reduce inefficiency, there is a larger need to carry out cosmetic defect inspections on the wafers before developing them. This includes inspecting scratches, cracks and stains on the silicon wafers. However, as chipsets are getting smaller, a higher resolution is needed for inspection. Furthermore, some defects can be as small as a micrometre, which makes them hard to detect with the naked eye.

Most wafer die have a reflective surface, making inspections challenging as the lighting will be uneven. Moreover, some defects are only able to be captured under specific lighting conditions. This means that users would need to prepare multiple setups to capture different types of defects, which would be cost inefficient. Users would also want a compact solution for the wafer fabrication process, needing lesser machinery for the backend and frontend processes.

Hence, what would be a cost-efficient and space constraint solution to this problem? 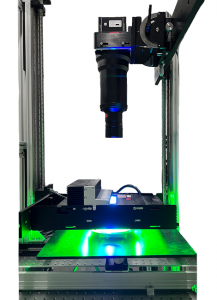 Chromasens allPIXA evo 15k CxP4 mono camera is equipped with a trilinear CMOS sensor, which allows the camera to capture high-resolution images at high speed. Moreover, the line scan camera has a line length of up to 15,360 pixels, meaning images captured would have higher accuracy compared to area scan cameras.

The Chromasens allPIXA evo 15k CxP4 mono camera can also be used to trigger up to four different flash controller channels synchronized to its line acquisition. In this application, we used both bright field and dark field illuminations to obtain several images simultaneously in only one scan by line multiplexing. 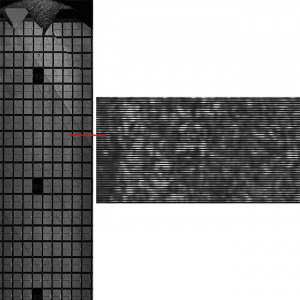 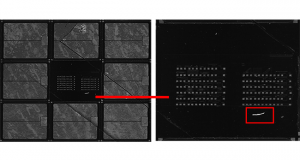 Contact us if you want to learn more about using the Chromasens multi-flash channel feature in your applications!